In 1979 The National Youth Orchestras of Scotland (NYOS) presented its first series of concerts in Falkirk, Aberdeen and Dundee during which over 100 young instrumentalists took part. At the time, the organisation consisted of just one flagship orchestra.

Today NYOS provides orchestral experiences in classical and jazz music for over 600 students per year aged between 8 and 25, through its comprehensive pathway of orchestras, jazz bands, training ensembles and an ever-expanding outreach programme.

The founding of the organisation is formally announced when Chairman Professor Donald Pack receives a cheque for £5,000, the first instalment of a £20,000 pump priming grant from Carnegie UK Trust.

First logo for the organisation, originally known as The National Youth Orchestra of Scotland.

Tour of the Highlands and Northern Isles with a concert at Sullom Voe Oil Terminal, which set a record for the farthest point north at which a symphony orchestra had performed in the United Kingdom.

Up and coming violinist, Nigel Kennedy, performs as soloist in a tour of Glasgow, Edinburgh and Perth. He would return the following year for the Viking Tour.

The Viking Tour of Orkney, The Faroe Islands, Norway, Sweden and Denmark begins, with the support of Volvo transportation.

The Viking Tour continues on board P&O Ferries.

A BBC documentary is made for the programme Spectrum, following the orchestra throughout the Viking Tour of Orkney, The Faroe Islands, Norway, Sweden and Denmark.

The orchestra perform at the Usher Hall as part of Edinburgh International Festival under the baton of conductor Sir Alexander Gibson.

The orchestra embark on a return tour of Scotland, Norway and the Faroe Islands, conducted by Sir Alexander Gibson with soloists Krzysztof Smientana (violin) and Murray McLachlan (piano).

Percussionist Dame Evelyn Glennie featured as soloist in John McLeod's Percussion Concerto, which is conducted by the composer.

Richard Chester joins as Director of the organisation, a post he held for 20 years.

The orchestra makes its Proms debut at the Royal Albert Hall, London following a tour to the Netherlands.

The orchestra perform in Liverpool, Fort William and Glasgow with pianist Peter Katin under the baton of Sergey Vlasov.

NYOS Chamber Orchestra is formed, and makes its debut in Edinburgh and Glasgow with a programme which includes a world premiere by Scottish composer Edward McGuire. 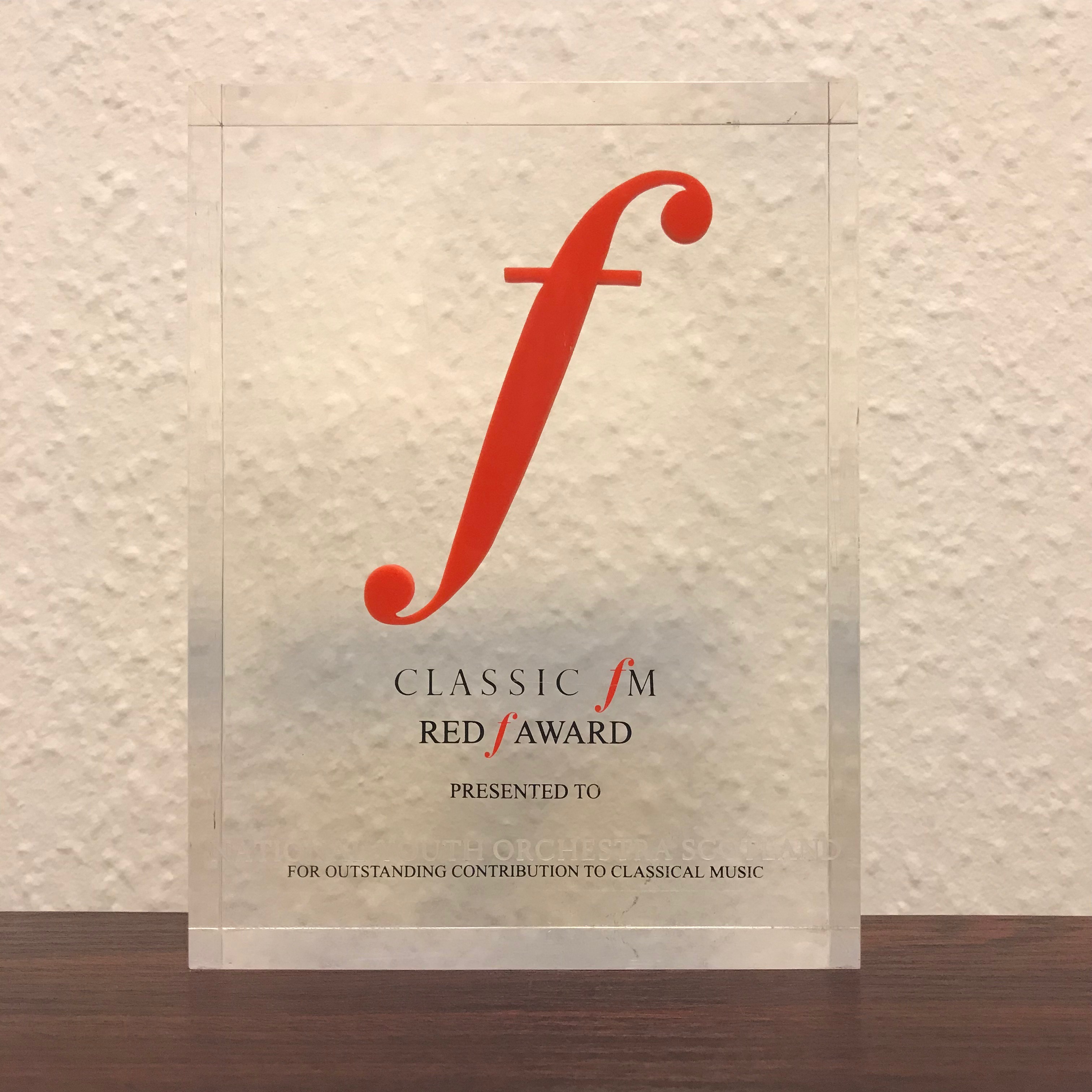 NYOS Chamber Orchestra embarks on a tour of Japan, performing at the World Youth Orchestra Festival with conductor William Conway.

The flagship orchestra return to the Netherlands with performances in Amsterdam, Rotterdam and s’Hertogenbosch. The programme of Stravinsky, Ibert and Tchaikovsky conducted by Japanese conductor Jun’icki Hirokami features soloist William Bennett.

First public performance of the Jazz Orchestra at the Macrobert Centre in Stirling, directed by Richard Michael.

First public performance of the National Children’s Orchestra of Scotland in the Queen’s Hall, Edinburgh conducted by James Durrant with the young Nicola Benedetti as orchestra leader.

A Royal Celebration is hosted by HRH Prince Edward at Holyrood House to celebrate the achievements and the 21st anniversary of The National Youth Orchestra of Scotland.

Members of the National Youth Orchestra of Scotland warming up before the concert in a café opposite Glasgow City Halls.

The National Children's Orchestra of Scotland summer course is established

NYOS celebrates its 25th anniversary at Holyrood House. The event coincides with the release of Nurturing Talent by Ex-Chairman Colin MacLean, a book which reflects on the context for NYOS and the people who gave life to the organisation in its first 25 years.

Colin Currie performs the world premiere of Thea Musgrave’s ‘Wood, Metal and Skin’ with the Symphony Orchestra. Colin was a member of the orchestra’s percussion section from 1990 to 1994, and in 1994 became the first percussion finalist in BBC Young Musician of the Year.

The Symphony Orchestra perform in Berlin as part of the Young Euro Classics Festival.

The Symphony Orchestra tour to Northern Ireland and the Republic of Ireland for the first time, with performances at the University of Limerick, Dublin’s National Concert Hall, and Belfast’s Ulster Hall.

String players from the Symphony Orchestra collaborate with the Jazz Orchestra in a unique recording at Castlesound Studios in Edinburgh. 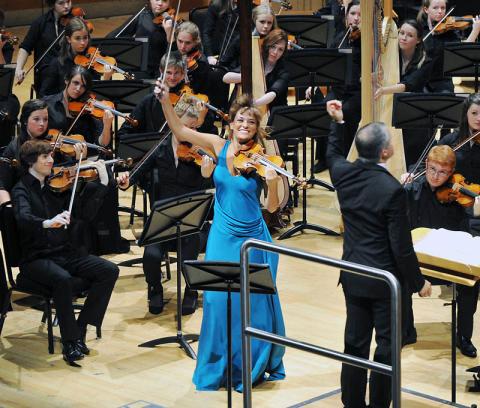 NYOS introduces its vision for a new educational pathway based on annual membership, staged development, and nurturing young musical talent in Scotland. The vision: 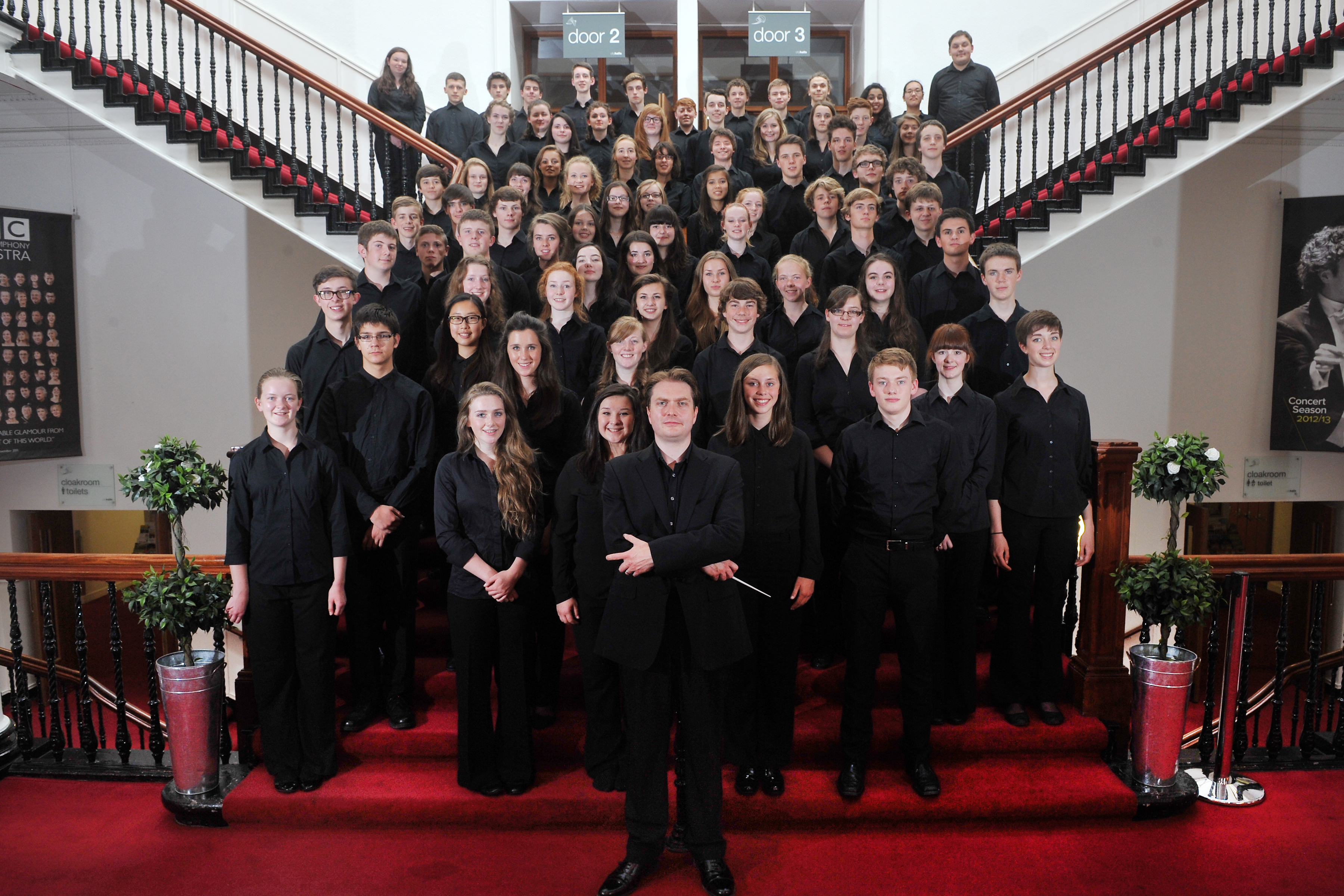 NYOS Futures in collaboration with London Sinfonietta perform Steve Reich's 'Variations for Vibes, Pianos and Strings' with the composer in attendance. 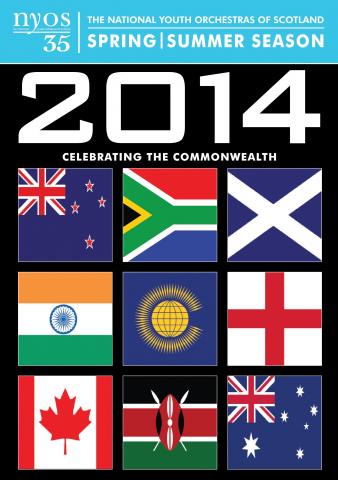 As the City of Glasgow gears up to host the 20th Commonwealth Games, NYOS celebrates the occasion with a themed programme across all its ensembles. Arts organisations across the city were preparing, planning and rehearsing for a cultural extravaganza.

The organisation celebrates its 35th anniversary with a Gala Concert attended by its Patron, HRH The Earl of Wessex, in Edinburgh’s Usher Hall. The Symphony Orchestra was joined on stage by extraordinary trumpet player Håkan Hardenberger.

Thanks to the generous legacy bequest ofJudith Worthington (nee Betteridge), NYOS is able to purchase the upper two floors of its exisiting premises in Glasgow to create performance, rehearsal and audition spaces.

As a violist, Mrs Worthington spent her professional life performing with the Scottish National Orchestra (now RSNO), as well as tutoring aspiring musicians. 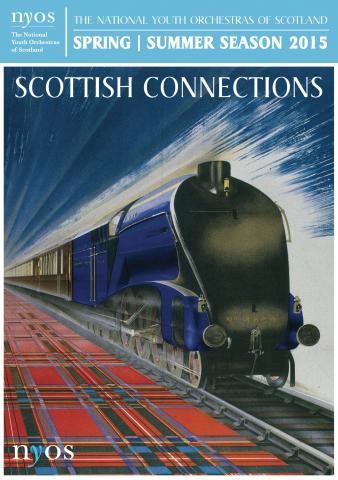 NYOS announces a year of music themed around Scottish Connections, and announces a welcome return to the international stage with the Symphony Orchestra touring to China in the summer.

The roof of the recently purchased top floor of the NYOS building begins to leak, eventually leading to the collapse of the ground floor ceiling, prompting renovation works to begin in earnest.

Second floor and landing of NYOS building before refurbishment works

NYOS Symphony Orchestra embarks upon an ambitious tour of China, performing in world-class venues in Beijing, Shanghai and Tianjin.

The Symphony Orchestra perform a ‘bon voyage’ concert in Perth concert hall before its tour of China.

NYOS Symphony Orchestra musicians blog about their experience during their tour of China, published in the News Section of the website.

First floor of the NYOS building after the refurbishment works 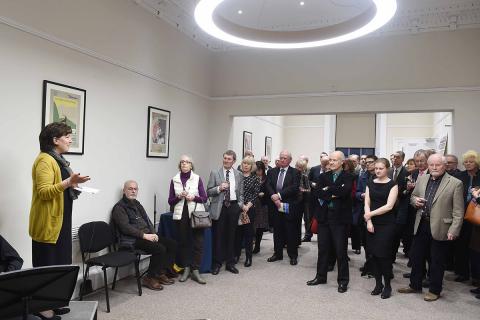 Invitation to the Dance is the theme for all NYOS ensembles. The season launch event doubled as the unveiling of the newly refurbish NYOS building, with performance and audition spaces. Guests were treated to performances from a wind quintet and jazz trio.

The renovation of 13 Somerset Place reached final completion in May 2016 providing NYOS with new rehearsal, performance and audition spaces. None of which would have been possible without Judith Worthington (nee Betteridge).  Her generous gift will continue to benefit the young musicians of NYOS for many years to come.

In a truly landmark year, both the NYOS Symphony Orchestra and NYOS Jazz Orchestra give stand-alone performances at the BBC Proms in the Royal Albert Hall. The Jazz Orchestra welcomes back two of its most celebrated guest artists; Iain Ballamy and Liane Carroll.

Colin Currie returns to perform Andrew Norman’s Percussion Concerto Switch with the Symphony Orchestra, under the baton of returning-conductor Michael Francis. The orchestra’s summer tour includes a performance as part of the Aberdeen International Youth Festival. 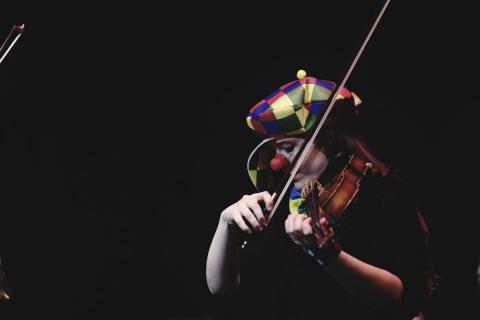 NYOS Camerata make their debut at the Edinburgh Fringe, performing Concerto for Comedian and Orchestra with Vikki Stone at the Pleasance Grand.

After 30 years, NYOS Symphony Orchestra made a welcome return to Edinburgh International Festival (EIF). 2018 was designated Creative Scotland's Year of Young People and appropriately the Festival showcased extraordinary young classical talents from both sides of the Atlantic. 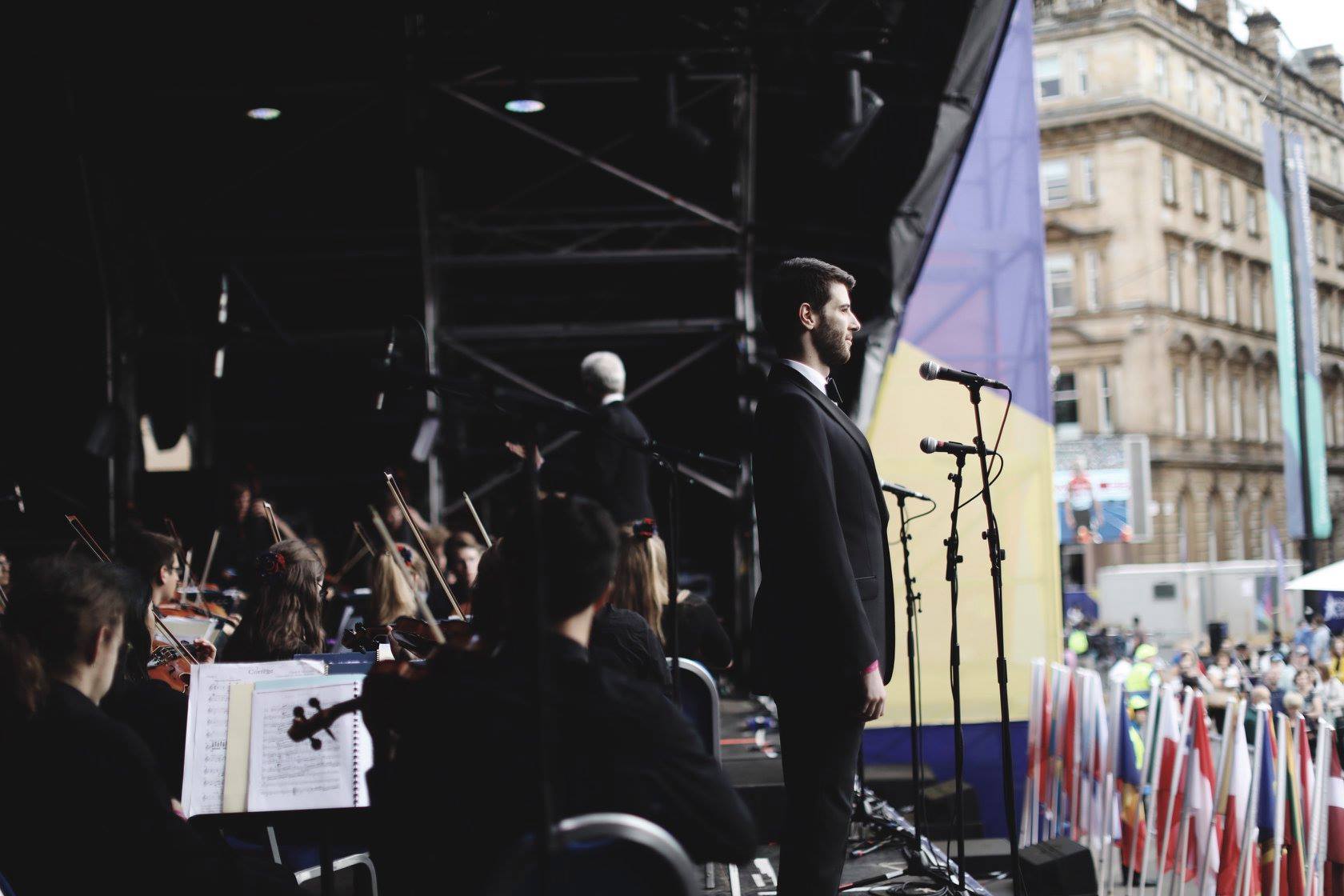 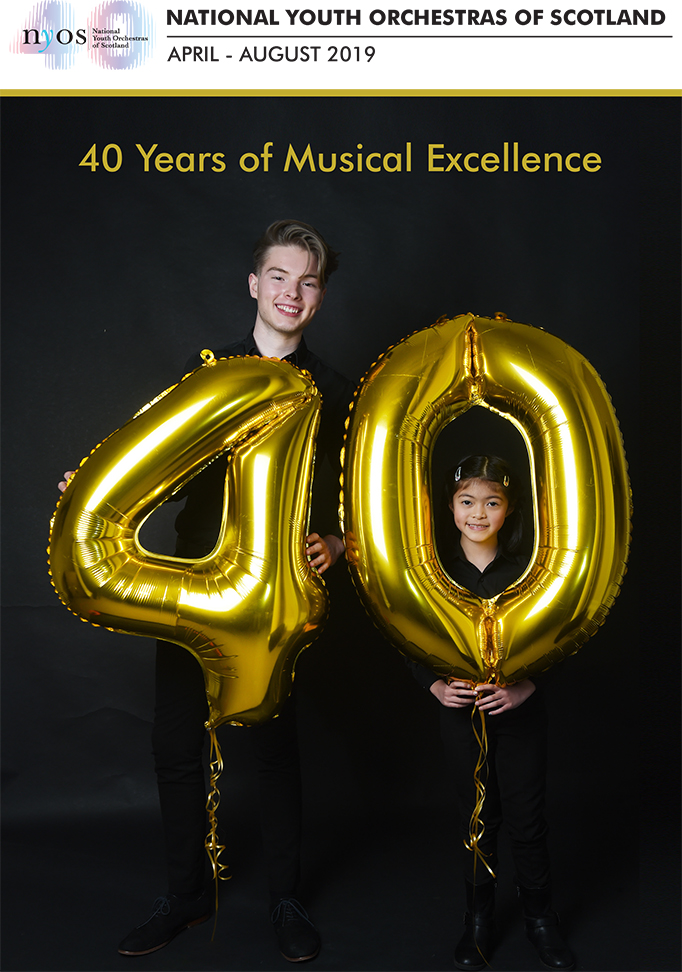 The National Youth Orchestras of Scotland's launches its 40th Anniversary celebrations! In 2019 we honoured four decades of nurturing and developing the country’s best and brightest young musicians. To read more about our 40th Anniversary progamme please click here

As part of its 40th Anniversary celebration NYOS launch it's 'Alumni Stories' film series featruring alumni from all walks of life discussing the importance of organisations like NYOS in their own development and future careers.