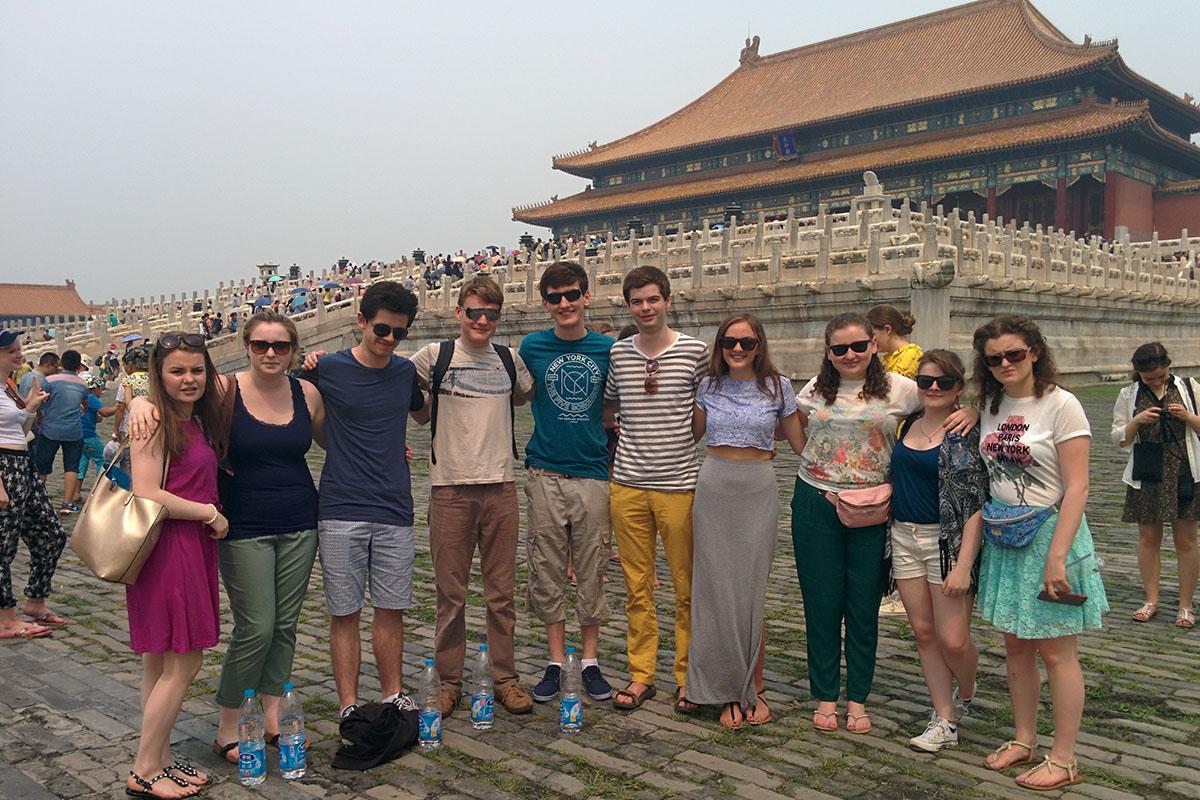 This morning we visited the Forbidden City - the residence of the Chinese emperor in imperial China, before 1912. According to Lee (of bus 2, pure dead brilliant tour guide, we love you Lee), Beijing in effect consisted of four cities: the imperial city, where all of the officials and people of importance lived; the inner city; the outer city; and the forbidden city, from which most people were forbidden (ingenious name). This colossal complex, built in the 15th Century, housed only the family of the emperor, their servants and tutors, and the emperor himself. It was amazing to be able to see (and yes, extensively photograph) this colossal and ornate complex from the inside - highlights included the over 300 enormous earns originally kept filled with water, apparently in readiness for any fire in one of the extremely flammable traditional Chinese wooden buildings; the houses in which the emperor's concubines lived (one emperor had over 3000 of them); and the beautiful garden containing 400-year-old cyprus trees and huge ornamental rocks. The scale and intricacy of the forbidden city made a huge impression - definitely another experience of a lifetime.

Three down, one to go! Tonight's concert in Beijing concert hall was a huge success, featuring the standard three encores, revolving 'cellos, rapturous applause, flowers and standing ovation that one comes to expect of a typical NYOS concert in China. However, we have now been introduced to the new and exciting phenomenon that is... the in-concert raffle. This (we think, the whole thing was in Chinese) consisted of several large QR codes projected onto a screen before the concert, which the audience could scan to enter a raffle on their smartphones. At the end of the concert (after two encores, to be precise), the enormous projector screen rolled back down (completely obscuring the percussion section), and a button appeared below a picture. The conductor was invited to say 'start', at which point the button was clicked and more pictures (entries in the raffle, it transpired) flashed quickly by until the conductor said 'stop'. Then the screen froze to display the winner, who came onstage to receive their prize. This happened twice more. We're yet not sure if the bemused and uncomprehending youth orchestra is an integral part of this phenomenon or not. All in all, today has held a veritable cornucopia of new and memorable experiences.

This morning the orchestra went on what will be one of our last sightseeing trips on this tour: the forbidden city. This was the place where the ancient Chinese emperors lived, and we all enjoyed the detailed history and explanation provided by our fabulous tour guides. We then headed to lunch, and the Beijing Concert Hall for our rehearsal. Here we encountered our first "hole in the ground toilets" which were, uh, interesting?... In our rehearsal some of us sat out of the Shostakovich, letting some students from a local music primary school play with us. They were very talented and it was a treat all around.

Our performance seemed greatly enjoyed by our spectators. The Shostakovich was a hit with the children in the audience and the Chisolm was the best we've played it yet. The Rachmaninov ended in a standing ovation. Once again we played our three encores, the second Scottish piece got us another standing ovation and the chinese folk tune was met with many smiles. The night ended with a flash, literally, it's pouring warm rain, almost like home.