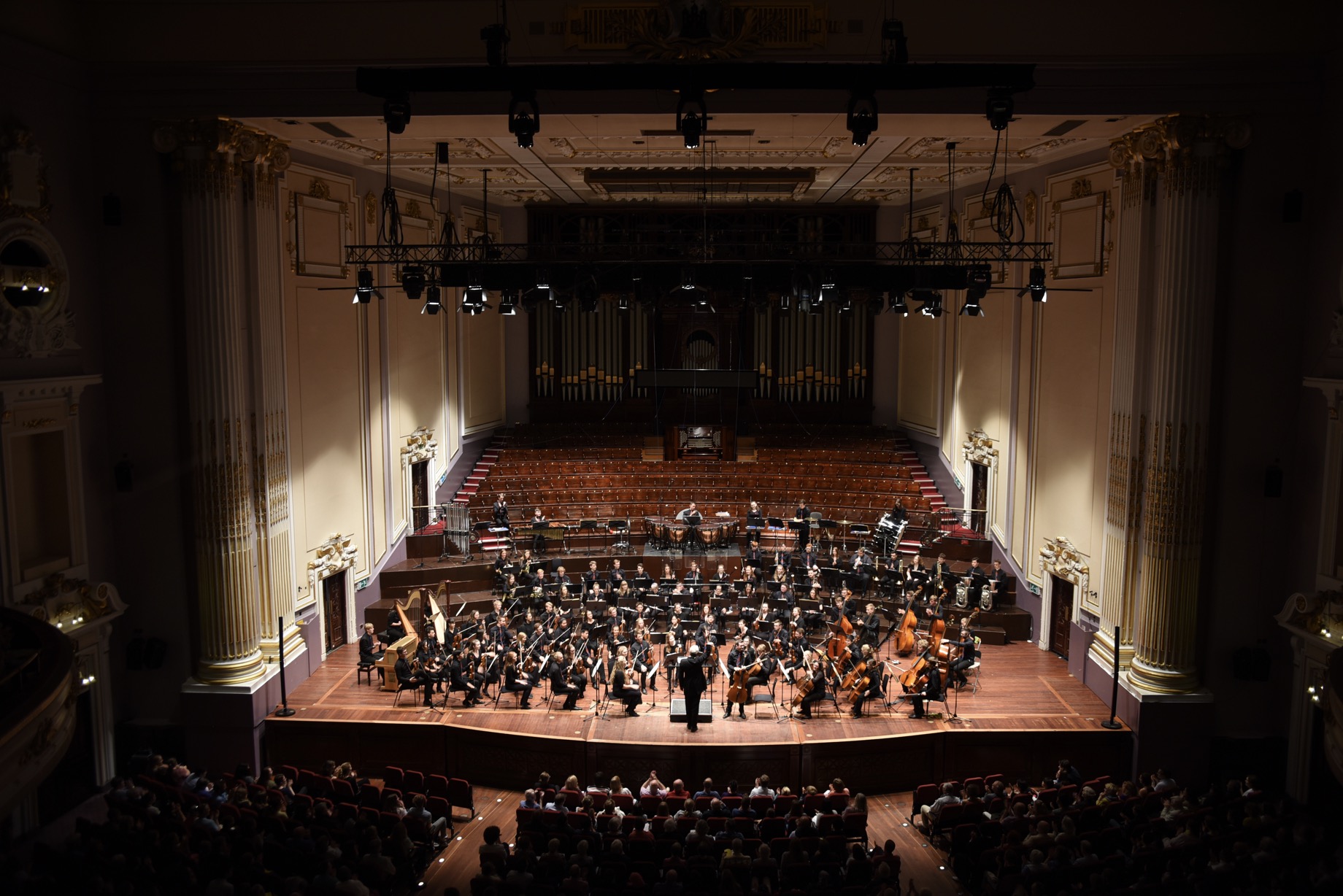 The Symphony Orchestra summer tour opened at the glorious Caird Hall and as conductor Paul Daniel pointed out to an extremely lucky Dundonian audience, this was two concerts for the price of one. Part of our operatic concert at Festival 2018 in Glasgow and almost all the programme for our welcome return to the Edinburgh International Festival stage at Usher Hall. 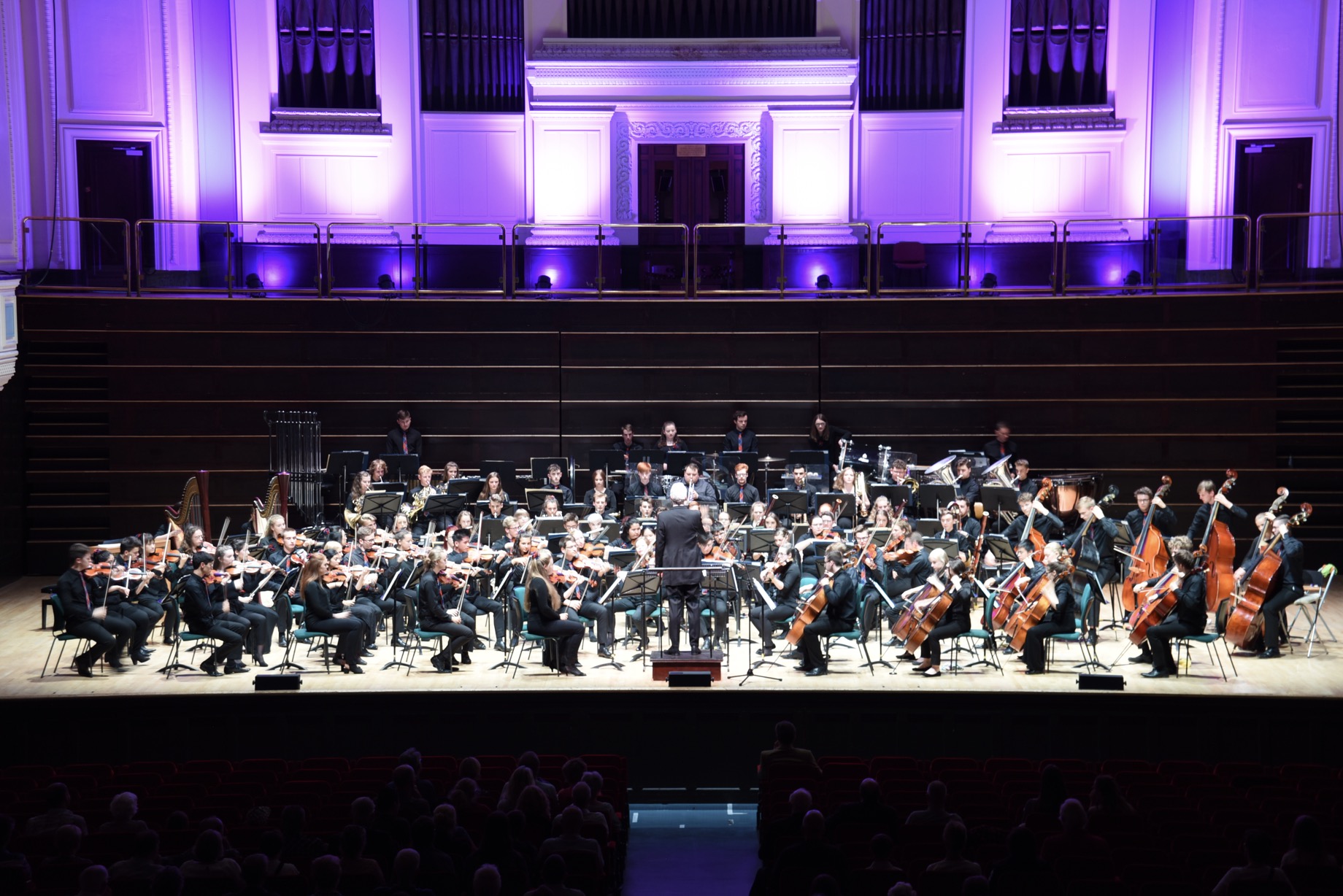 In the first half, we were treated to the magnificent voices of Rebecca Afonwy-Jones, David Lynn, Emma Mockett and Mark Nathan as the recent Royal Conservatoire graduates delivered popular operatic arias and duets with panache. Below we have a clip of all four performing a rousing rendition of Verdi’s ‘Brindisi’ from La traviata.

The stage belonged to NYOS Symphony Orchestra for the second half of the concert commemorating the deaths in 1918 of three composers, Debussy, Cecil Coles and Lili Boulanger. As Debussy’s La Mer unfolded, the players grew in confidence and efficiency and finished at the top of their game. All in all, the concert provided the perfect preparation for the rest of the tour.

The Symphony Orchestra’s ‘Glasgow Meets Berlin’ Gala Concert was quite special as the Orchestra, along with the four rising stars from the Scottish opera scene wowed an enthusiastic audience in the centre of the city. Presenters Jamie McDougall and Rebecca Wilkie provided witty repartee as we segued back and forth between Glasgow and Berlin for wonderful performances by the Brandenburg Symphonic Orchestra alongside singer Israel Martins dos Reis, all beamed back live from the Kaiser Wilhelm Memorial Church.

“NYOS’s live presence, which was well-amplified and driven by more party-style repertoire, stole the show. There was dynamic thrust from the word go, and a performance of Bernstein’s Candide overture that sizzled with pizazz. Then came the outstanding talent from the RCS Opera School, and a series of opera solos and ensembles that gave the punters the thrill they were after.” Ken Walton, The Scotsman, August 2018

Glasgow at its best! Fabulous free concert for @Glasgow2018 with starring roles for @RCStweets @NYOScotland in George Square, deftly lead by @pauldaniel321 and @TenorJamieMacD. So refreshing to see music bringing us all together #Berlin2018 @Festival2018 pic.twitter.com/RRYNn9P8Kl

Then all roads led to Edinburgh. It had been 30 years, almost to the week since any National Youth Orchestras of Scotland ensemble had graced the Edinburgh International Festival stage. To say we were excited would be somewhat of an understatement. Conductor Paul Daniel and the Orchestra had one extra day to prepare and that additional work really paid off. Bookended by Debussy, the Orchestra performed two rarely heard gems in Boulanger’s exquisite conjuring of a spring morning (film clip below) followed by Coles’ beautifully poignant Behind the Lines.

"The young players were at their most impressive on the Boulanger and with Debussy’s Iberia". Kieth Bruce, The Herald Scotland, August 2018

If their confidence grew in Dundee, it peaked in Edinburgh as every single member of NYOS Symphony Orchestra performed to a higher level, delivering a breath taking version of Debussy’s Impressionist masterpiece La mer. This is where these immensely talented young musicians belong; on a world class stage, at a prestigious international event, in front of a capacity crowd. Everyone connected with NYOS is extremely grateful and so very proud to have these amazing young musicians represent Scotland at the national level. Special thanks to Edinburgh International Festival for all its support and for giving our Symphony Orchestra members this amazing opportunity. It’s like they have never been away.

1-hour concert at 5pm a pleasing thing, esp to showcase @NYOScotland in exuberant form, the treat being Coles' Behind the Lines, a lovely and unexpected piece. @edintfest

So proud of the National Youth Orchestra of Scotland - they si captured the mood and wonder of Debussy’s La mer @edintfest in the Usher Hall @NYOScotland 🏴󠁧󠁢󠁳󠁣󠁴󠁿 🎻 🎺 🎼 pic.twitter.com/71lDoApLER